I am Working Hard on the Bell Piano - Cleaning

I have been going over the bell piano I received, and started to give it a cleaning and inspection of its interior.

It looks like it may have been cleaned before, but certainly not for a long time. Heck, it is old, I expected it to be dirty. Vacuuming out as much dust as I possibly could was not enough. I knew that sooner or later I would have to figure out how to reveal the keysticks, determine how to safely remove and re-install them, and inspect and clean underneath.

Removing the keyslip and fallboard wasn't as bad as I thought it would be. I was happy getting at the keysticks wasn't a difficult task. Man, they were dirty, and what I found under them was worse. coins, stick pins, bobby pins, beads, and other junk had slipped between the keys over the years, and the amount of dust underneath the keys was more than expected. \sadly, I found that all the felt washers need to be replaced.

I removed and scrubbed (dry, not wet) each keystick in small groups. Sure they are numbered, but removing them all at once seemed like looking for trouble. Here is a side-by-side image of what I encountered and some of what I cleaned. 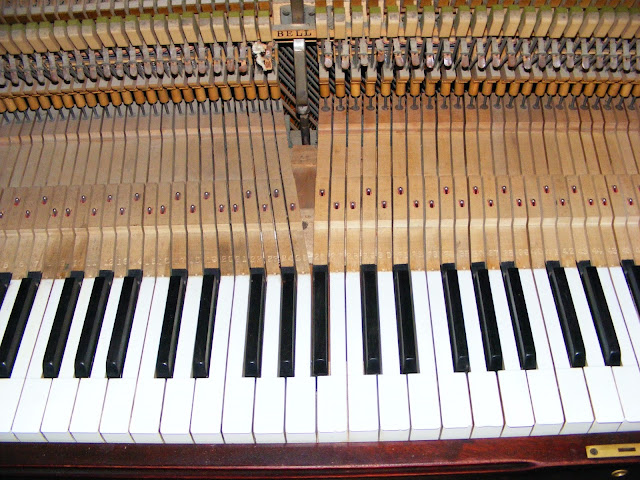 It is pretty obvious what side is the newly cleaned keysticks.

The camera flash makes the ivory look quite nice, but in reality, it is not. It is stained and not as white as it appears in the image. Cleaning it was a lot of work. Many keys have damaged ivory, so I may replace the keytops one day anyways.

It is hard to see from the image, but some idiot replaced a bridle strap with some string (looks whitish) on the action for key #24 (second to the left of that center spacing). Yet another reason to replace all 88 bridle straps. Won't that be fun?

Thanks for checking it out. More to come, as time and funds permit.

Lastly, the folks at the The PianoWorld Forums are super friendly and helpful. Very nice of them considering that some new guy is barging into their trade, and asking many questions.
at 10:42 PM