The first, and only film camera I ever purchased is my trusty old Minolta X-370.

It was inexpensive (not to me) but described as very capable at the time. For some it may feel square, and lack a bunch of features, but I love it. The small LED indicators in the viewfinder made the Pentax K1000 I used in high school seem primitive. I have much love for the Pentax K1000,

The Minolta X-370 required a couple batteries, but I could live with that. The X-370 has aperture priority and metered manual modes. I sometimes  used the AF lock, but mainly used manual as much as possible. While I had plans to save up and upgrade from the X-370, I didn't. It worked, it felt nice to me, and I grew used to it.

Here it is. It's dusty and has the old cheap lens I used way too much. 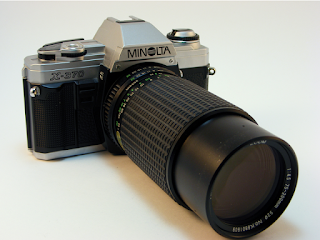